Some Reflections on Mahatma Gandhi’s Birthday 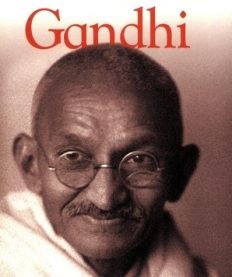 I used to have some doubts about the suitability of Mohandas (“Mahatma”) Gandhi to participate actively in the governance of post-independence India. Some of his ideas would have been antithetical to the development of large-scale industries, where scale is needed for efficiency. Often portrayed spinning his own yarn on a rudimentary village spinning wheel, Gandhi was mocked by some as a Luddite.

But I have revised my opinion based on two considerations:

1—Uplift of the Base

After Gandhi was assassinated in 1948, Jawaharlal Nehru, the first prime minister of India and a Cambridge-educated elitist, directed—under a cloak of socialism—investment in mega projects such as steel mills and dams (which is fine in itself) and elite educational institutions. However, basic education, literacy, women’s rights, village roads, and rural uplift were neglected. 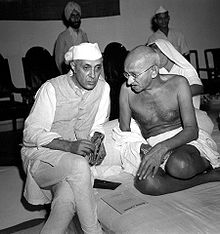 Nehru’s was a misdirected and somewhat lopsided effort that has hurt Indians. By contrast, the Maoists in China, whatever their other  cruelties, insisted on full literacy, equality for women, and rural uplift. The result was that once the heavy hand of the state was lifted in China (Mao died in 1976), and market forces were allowed to have their play, the talent of a broad swathe of Chinese society could be unleashed.

By contrast, when India liberalized (after 1991), 30 percent of Indian men and 55 percent of Indian women were still illiterate and could not participate in a modern economy and its thought patterns. Had Gandhi lived in post-independence India, he may have moderated the centralized excesses of Nehru and the Congress Party regimes and done more to lift the lives of the 600 million who still live in Indian villages.

Gandhi has been portrayed by some of his biographers as having “fuddy-duddy” ideas rooted in the past, as well as a person with inflexible ideas that did not correspond with the industrial age. But this is incorrect.

Gandhi would have adapted his thoughts as circumstances required. Just think—he was born into a traditional religiously observant Hindu family. Yet he crossed the “black sea” to study in England, become an Inner Temple barrister, practice law, and lead civil protests against apartheid in South Africa. Later, he cannily outmaneuvered the British Raj out of India with peaceful protests. 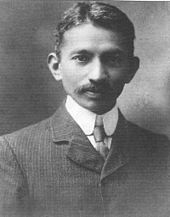 Importantly, here was a man with an innate humility and lack of hubris, willing to adapt his tactics and ideas as facts presented themselves. Do not forget also that Gandhi was, like Prime Minister Narendra Modi, a Gujarati with commercial traditions going back millennia. He would not have been averse to the positive aspects of business or private profit. He accepted the support and friendship of Ghanshyam Das Birla, a Calcutta-based industrialist.

India Still Needs to Help Itself

India still needs to educate and uplift half its 1.27 billion population that lives in villages. By this I do not mean giving them subsidized food or fuel. The Indian food-rationing system is a grotesque example of waste and fraud, with barely 50 percent of the food purchased by the state at above-market prices actually reaching the poor. The rest is misappropriated and arbitraged into the regular market at a higher price—or it just rots in state warehouses.

What the Indian poor need is to have their thought patterns lifted by education. Here again, we read reports that up to a quarter of the ill-paid school teachers do not show up every day. Gandhi was a great exponent of self-help—villages organizing and bootstrapping themselves, with only seed capital from outside. The many images and photos of Gandhi spinning his own yarn at a crude spinning wheel should not be interpreted as his impracticability and being out of touch with modern technology—spinning mills that would be a thousand times as productive in making yarn.

Gandhi and His Spinning Wheel – The Story Behind the Photo © Time-Life. 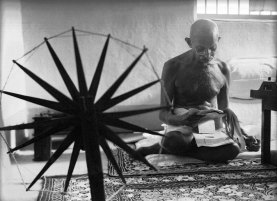 Rather, Gandhi, who early realized the power of imagery, was making the point that villages should organize and help themselves. Indeed, today we see a growing number of examples of Indian villagers building their own roads, water systems, and solar-power-generation systems—on their own initiative. Perhaps the Confucian proverb  “Give a man a fish and you feed him for a day; teach a man to fish and you feed him for a lifetime” needs to be applied to rural India.

Every day, billions of rupee banknotes bearing the image of Mahatma Gandhi change hands. Many Indians today, especially the young, have little concept of what the wizened, slightly stooped, but benign man stood for. When presented with the name Gandhi, many think first of Sonia Gandhi (the Congress Party president, and no relation by blood or by ideas) or her scions.

printed by the Reserve Bank of India in Dewas, Madhya Pradesh, in 2008.

It was a great tragedy for Indian economic development, just as India became independent of Britain in January 1948, that Mahatma Gandhi was assassinated for the crime of trying to achieve harmony between Hindus and Muslims. The assassin was Nathuram Godse, a Hindu fundamentalist and adherent of the Rashtriya Swayamsevak Sangh (RSS).

It was the RSS that later spawned the Bharatiya Janata Party (BJP)—the party of Narendra Modi, the new prime minister of India, who just last month (September 2014) made his first official visit to the US to address the United Nations General Assembly and for talks with President Barack Obama. 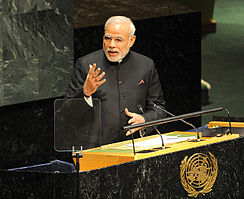 Prime Minister Narendra Modi delivering his maiden speech at the 69th session of the UN General Assembly on September 27, 2014. Wikipedia 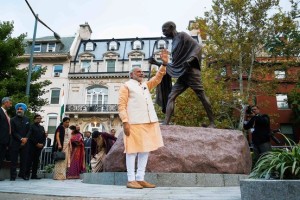 Modi waving in front of the Mahatma Gandhi monument at the Indian Embassy in Washington, DC after vowing to cooperate on key issues in a meeting with President Obama, September 30, 2014. ©Jonathan Ernst/Reuters